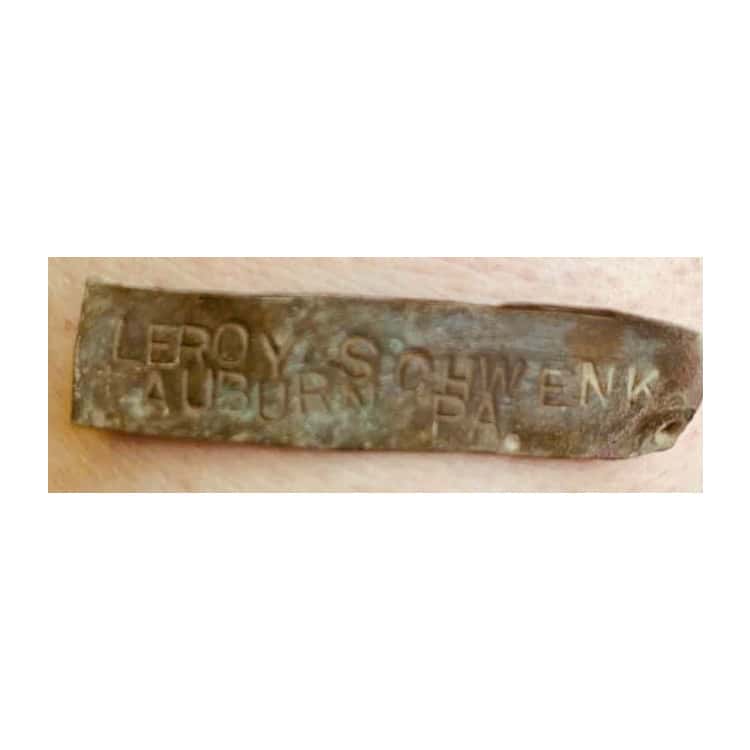 This story covers one of my first finds at my first permission after starting metal detecting last year. My mother-in-law was one of 5 children raised on an old farm in rural Pennsylvania in the very early 1900’s. One of her brothers used to trap small game near the creek that ran behind their property. Right after I got my first metal detector in July, 2020 I contacted my wife’s cousin who now lives in the old homestead. I asked if I could detect their yard and I was told yes could I try to find a diamond and gold earring that his wife last a few years ago while she was cutting the grass. I happily agreed. One of the days while detecting, I found a bent piece of brass roughly 1/2” x 3” long. Stamped into the brass was the name Leroy Schwenk, Auburn, PA. I knew that Leroy was one of my mother-in-laws brothers who also grew up in the home. When I showed the brass tag to the current home owner, Terry Schwenk got emotional. He said that the tag belonged to his late father who used the tags to identify his traps when he set them in the creek. I gave the tag to Terry who then told all of his relatives about me finding the tag and he then displayed it in his living room for everyone to see. The tag isn’t worth any money, but it sure made my investment in time and money to buy my detector worth every penny to see how much his father’s tag meant to him. Sometimes, the simplest things mean the most.