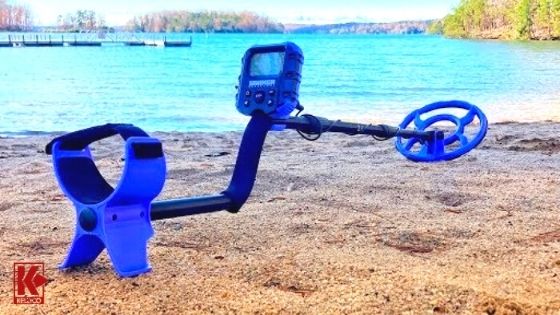 I was excited and humbled when Kellyco asked me to field test the Striker z60 Metal Detector. The testing plan was on that would really wring out the new metal detector, both individually and head-to-head against other peer detectors to provide you, the metal detecting community, a thorough review of the new machine.

That’s what we’ll do in this article. You’ll read about the machine’s capabilities and how it performed both in the field and in an air-gap bench test against other similar machines. You’ll get to see the Striker z60 Metal Detector in full 2D technicolor video action as I recover various items, including a 1700’s relic! So let’s get started!

The Kellyco Striker z60 Metal Detector (see Figure 1 above) is designed as a compact, agile Grab-n-Go metal detector for the beginning hobbyist or the traveling metal detectorist. Even as an entry-level machine, the Striker Z60 packs features such as a fully waterproof coil with coil cover, 8-tones for each target category, three category discrimination notch modes, a pinpoint mode, a backlit user interface, 4-tone audio, and Ground-Grab ground balancing. From unboxing (see my unboxing video on YouTube at https://youtu.be/l5SNt6ASe6A) to coil-over-soil is only a few minutes. It’s very simple to assemble or collapse/disassemble, incredibly easy to operate, and loaded with robust capabilities.

The first thing I noticed about the Striker Z60 is that it’s very light (only 2lb 10.6oz…one of the lightest in its class) and its backbone is solid! No “shaft sway” is experienced when swinging the detector even though it’s paired with a 10″ coil! The machine feels very balanced owing in part to the waterproof 10″ concentric coil at the end of the very sturdy combination of a high-grade aluminum upper-shaft and very thick-walled plastic-composite lower shaft connected with robust shaft locks. This composite lower shaft also means that all external components below the mid-shaft lock are non-metal, completely eliminating the possibility of corrosion even from salt water!

Heavy-duty rubber bushings recessed at the end of the bottom shaft and large easy-to-grasp coil bolt ends also ensure that the coil stays firmly in the position you select. The shaft mounting bracket on the coil itself seems very solid, and the coil cable is smartly designed to connect to the back top edge of the coil, behind the lower shaft, providing a further modicum of cable protection from potential impact/hang-up on obstructions, while still allowing the coil to fold flat against the shaft in a storage configuration.

The coiled cable itself is a little smaller in diameter than seen on many other detectors, allowing easier spiral wrapping of the cable around the shaft. The sturdy six-pin male cable connection easily plugs into the port on the back of the control box, eliminating almost any possibility of “pin bend”. However, the future addition of a locking mechanism to the six-pin cable connection would preclude the plug from unexpectedly becoming disconnected by an accidental swipe of the hand or errant tree branch snag, as happened to this field tester on a couple of occasions.

Handgrip angle on the straight-line offset shaft (like many other mainstream detector designs) is comfortable, allowing for both right or left-hand operation. The handgrip area is covered by a grippy foam sleeve, although the Striker Z60 would benefit from a more sturdy foam or a rubber grip as the sleeve tends to move/rotate on the shaft somewhat when detecting. I expect this movement would become more pronounced if detecting wet and/or muddy conditions. The “stand” on the bottom of the solidly built and velcro strap-equipped armrest helps ensure that the armrest stays out of the muck and also keeps the detector in a consistent level position when laid on the ground. 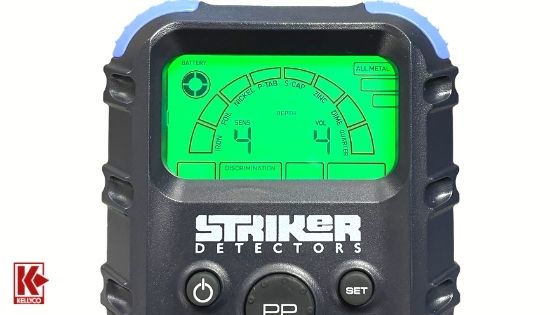 The control housing (see Figure 2), while not waterproof, is robust, well laid out, and designed such that, well, it just looks tough! A built-in speaker able to broadcast all sounds from the back of the control housing, allowing detector use without headsets. Wired headsets can also be used by connecting them to the 1/8″ headphone jack on the left side of the control housing. This smaller headphone jack allows the use of common lightweight headsets or earbuds such as those used for cell phones. If you elect to use a pair of purpose-designed metal detecting wired headphones, which normally come equipped with a 1/4″ male jack, you’ll need to acquire a 1/8″-to-1/4″ adapter.

The control buttons below the LCD display are very ergonomically laid out, and incredibly easy to press even while wearing bulky cold weather gloves. This attention to detail makes a huge difference when it’s below freezing! And the ease of operation…Kellyco really couldn’t have made it much easier. Upon power-on, a press of the Set (Settings) button to highlight the Discrimination setting allows the user to then press the Left-Arrow button to toggle between ALL METAL, JEWELRY, and COIN. The latter two discrimination settings notch out some of the eight discrimination categories (IRON, FOIL, NICKEL, P-TAB, S-CAP, ZINC, DIME, QUARTER) to optimize search results for those types of targets, while ALL METAL activates all notches allowing detection of any type of metal.

The Sensitivity setting ranges from 1 to 8, and the Volume setting ranges from 0 to 4, allowing for silent operation of the Striker Z60, if desired, to enable detecting by using only visual indications on the LCD display. In the upper left corner of the LCD display is a four-segment (25% segments) battery life indicator. In the center of the LCD is a 7-segment target signal strength indicator that functions only when the pinpoint function is active, providing the detectorist a visual cue of when their target is directly under the coil. There is a two-digit depth indicator, ostensibly to measure up to a 10-inch depth, although the highest reading I obtained was nine inches during field testing.

Performance in the Field – Head to Head

Game on! Into the woods of southeastern Virginia, I went on a beautiful (and chilly!) Fall morning with the Kellyco Striker z60 Metal Detector and two other peer detectors, the Teknetics Alpha 2000 and the Garrett ACE 250. The site was a large parcel of woods from which I have successfully recovered an array of colonial relics over the past few years. While a beginner may not necessarily head into the middle of the woods to try out their new Striker z60 Metal Detector, I thought the site’s range of deeper (8″-10″) brass and iron relics to more shallow (4″-6″) colonial buttons and small relics, would be a great environment to test the versatility of all three detectors.

To begin the day, I provided a brief video introduction of all three detectors. Click for the video: https://youtu.be/SYQ5rrXaI9s

While the first target wasn’t anything special, it did provide a good initial look at the capabilities of each detector. Those capabilities would make themselves more and more apparent, more stratified, as the day went along. Let’s take a look at a video of the first find. Click for the video: https://youtu.be/VfgqcfgItXg

The second target wasn’t the colonial relic I was looking for, but it did provide a phenomenal example of the deep-shooting capabilities of the Striker Z60 and the marked differences between the three supposed peer machines. This find was especially noteworthy due to the extremely small size of the target. Take a look! Click for the video: https://youtu.be/i8mc7kL4_ok

The third tiny target continued to showcase the versatility of the Striker Z60. No question that if the Striker z60 Metal Detector is capable of detecting very small, deep targets through a 2-3″ bed of fallen leaves, it will absolutely excel at a field, park, beach, or another site where the coil is in near-contact with the soil at all times! Click for the video: https://youtu.be/qpZyisJTlkM

The fourth target of the day was a killer with respect to the impressive performance of the Striker Z60…11…yes, 11 inches deep…wait until you see the video! For any detector, in almost any class, this target would have been a challenge to isolate and determine that it’s worthwhile to dig (although everyone should “dig it all” to find the good stuff!). For an entry-level detector such as the Striker Z60, it’s simply impressive. Check it out! Click for the video: https://youtu.be/VeqlYcHd-6g

The fifth and final target of the day was the icing on the cake. The Striker Z60‘s recovery of a 1700’s colonial flat button solidly 7 inches below the surface, beneath and signal-masked by a rusty, oxidized square nail…unreal. Click for the video: https://youtu.be/jlm486st4_4

The Kellyco Striker z60 Metal Detector performed impressively, on par with or better than its closest peer in this field test, the Garrett ACE 250. Taking into account its performance in the woods today, combined with the Striker Z60‘s features such as 10″ coil, backlit LCD display, and Ground-Grab ground balance, I’d give the Striker z60 Metal Detector the edge over the Garrett ACE 250. The Teknetics Alpha 2000 simply didn’t show up for the game today and was only able to detect very shallowly, distinct targets. 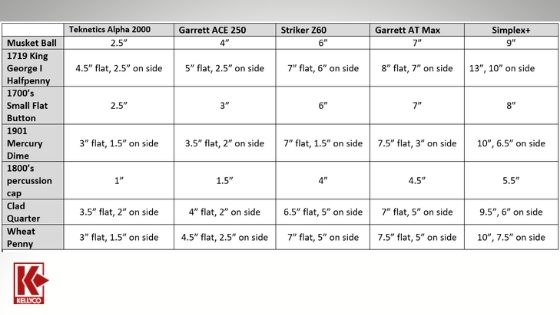 After a day of field testing in the woods, next was an air-gapped bench test. Each of the three detectors was placed in exactly the same elevated test position, set to similar sensitivity settings, with no possibility of external metallic or electromagnetic interference. For this test, I used a number of relics of various sizes and compositions, as well as a modern clad quarter and wheat penny to demonstrate what the park/playground/beach detectorist could expect to experience. To liven things up and see where the chips fell, I decided to also include my Garrett AT Max with the stock coil in the bench test!To add an extra degree of variability that a metal detectorist will actually experience with coins in the ground, I measured detection range from both a flat-faced profile and from a side of the coin profile.The results, seen in the matrices below, were stunning. The Teknetics Alpha 2000 performed the worst, as could be expected based on the field test results. However, there was a marked difference in the results between the Striker z60 Metal Detector and the Garrett ACE 250 of 2-3″ on average. That helps explain why the Striker Z60‘s field test performance was so solid, even against the Garrett ACE 250. The real showstopper, however, was how close the bench test results were between the Striker Z60 and the Garrett AT Max…only about a one-inch difference in detection distance! Granted this was an air-gapped, no soil/rock/mineral resistance, pure distance-to-target detection…but the Z60 was right on the heels of the Garrett AT Max. Now, that’s not to say in all situations, soil conditions, and target composition/orientations the same results would necessarily be true, but this test, made this detectorist sit up and take notice.