From the time native tribes first encountered the Europeans fleeing religious persecution in England (who would later establish the Plymouth Colony in the 1600’s) to present day, New England has been implanted with an incredible amount of history. Many stories of sacrifice, hardship, prosperity, religion, politics, war and the fight for freedom, all highlight the early building blocks of America. The vast green mountain ranges, rivers, valleys and seacoast have all influenced this history and the region is now home to an estimated 15 million people.

Each year, New England will play host to millions of tourists seeking a beautiful and safe place to enjoy the great outdoors. Many activities include hiking, camping, and skiing and of course metal detecting. Autumn is the most popular time as many people head to the region to witness the amazing transformation of the foliage covering the mountains from green to a blanket of stunning yellows, oranges and reds, all while enjoying the crisp air, smells, yearly harvest and baked goods the locals have to offer. 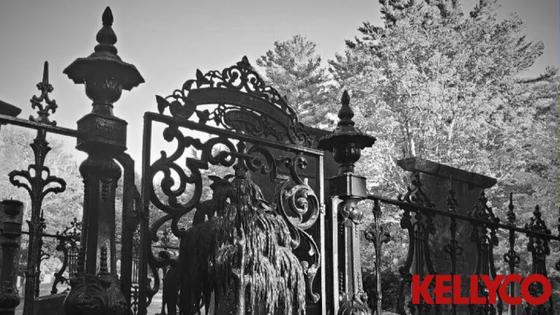 Detail from a New England cemetery.

Though many will pay a visit to this historic region, most will pass through the quiet towns and villages completely unaware of the history that surrounds them. Captivated by scenes of farmland outlined with stonewalls, rustic buildings, pastures cleared of trees and the livestock (including sheep, cattle and horses) that roam them, few will truly understand the challenges endured by those who first settled here. As a detectorist and lover of history, we get to get a little closer to these stories as we unearth a piece of horse tack or a stashed away gold coin. As history tends to be shadowed by the progress of today’s world, many accounts of times long ago might never be known. However, those who are observant, like many a detectorist, may notice sites of hallowed ground and the headstones that bear the names of those who lived out the stories that came before us. 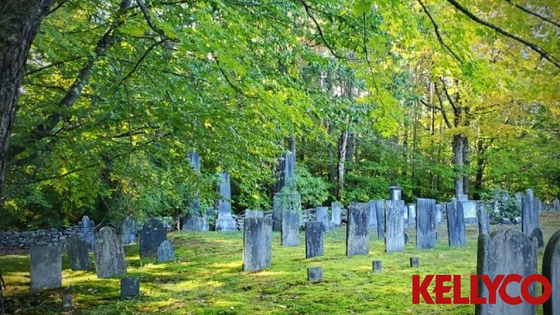 A Cemetery in New England.

Along highways, backroads and recreational trails leading in and out of cities, towns and villages, many cemeteries and graveyards can be seen. As all detectorists should know well, these locations are strictly out of bounds for detecting, but they are so rich with history. Often, the trails are well kept and maintained adding to the beautiful scenery that is New England. However, it is not uncommon, and often the locations many will not see, are burial grounds hidden away deep within the countryside. Some burials may be private family plots or near old churches and meetinghouses. Regardless, these sites are the final resting places of many early ‘New Englanders’ and their descendants, all of which played a role in the development of this area and will forever be a part of the history that make up this region of the world.

From a young age, I was always fascinated with old gravestones and memorials. As a child, I can remember trips into town while staring out the car window and trying to count them all as I passed by. This while imagining what the lives of those buried beneath must have been like before their passing. Growing up in a small village located in southern Vermont, I was fortunate to have access to places rich in history and classroom teachers who made it their mission to pass on the knowledge of times long ago. This all feeding into my desire to know more about those I would never meet, and the stories left behind. 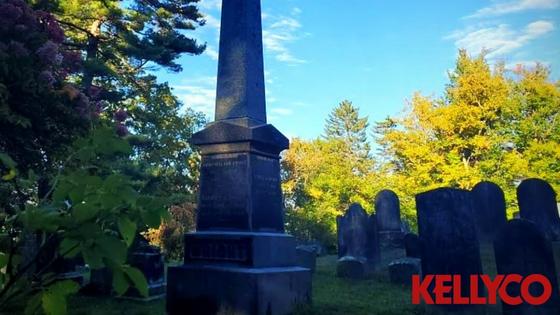 A Cemetery in New England.

Able to take lessons I learned, beyond the school walls, I often found myself trying to locate the resting places of those who intrigued me most. From Revolutionary War soldiers to the earliest pioneers, local legends and the first to settle the land, I would walk the many rows of marble and slate memorials searching for the stones labeled with the names I recognized from the classroom.

A Story Old As Time

Finding and paying respect to so many, some locations had much more to offer the imagination than just the information of who was buried below. One well known memorial I often visited, located off an old dirt road on the outskirts of town and within walking distance from my childhood home, is that of a woman named Rebecca, her husband Thomas and their children.

In December of 1785, a woman named Rebecca and man named Thomas were married in the small village where they resided. Prior to this and before starting a family, it is said that as a young man, Thomas was the owner of a slave whom he had promised eventual freedom to. However, Thomas would never fulfill this promise and according to local legend, Thomas would later be cursed by the man whom he enslaved, who upon his own death, cursed Thomas, wishing all his future children would die before they were grown as punishment for breaking his word.

Rebecca would become pregnant by Thomas 14 times during their marriage. All children, except for one, would not survive infancy. Sadly, Rebecca passed away at the age of 40, and when she died in 1803, her gravesite was marked with a slate stone that commemorated her, her 13 un-named children andthe only childthat survived infancy, who lived a longer life than Rebecca herself. 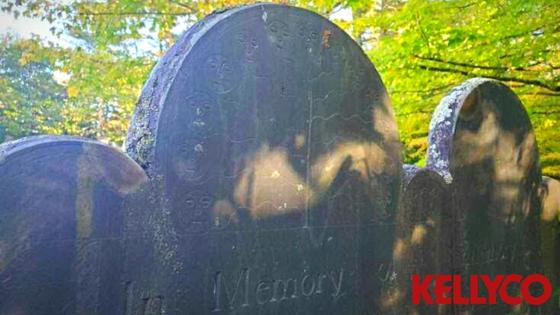 The tombstone of Rebecca.

Engraved into the stone reads as follows:

“Behold and fear as you pass by,

My Fourteen children with me lie,

Old or young you soon must die,

And turn to dust as well as I.”

Along with her children, Rebecca also shares her resting place and headstone alongside her husband Thomas. Before his death in 1826 would remarry twice, after her passing, and fathered 20 children in total. Of those 20, only 5 lived passed infancy.

The following inscription can be seen above Thomas:

“Youth behold and shed a teer.

Se their image how they shine.

As I grew older and was able to travel outside my hometown, I was lured to the Hope Cemetery in Barre, Vermont which was only a couple of hours away. The town of Barre dubs itself the “Granite Capitol of the World,” and it’s estimated that 1/3 of all tombstones in the US are designed using the grey granite mined from this area.

The history surrounding the cemetery is just as fascinating as those buried there. Artisans and Sculptors from around the world came to the Barre, and surrounding villages, simply to show off their talents using the beautiful grey granite mined from the mountains. Sadly, respiratory disease caused by the dust of the granite would become a grave concern for those who worked directly with it. This, along with the Spanish Flu epidemic in the early 1900’s forced many to have to face their own mortality. With the risk of death high during this time, artists would personally design their own tombstones before their passing, highlighting their skills they wished to be known for and remembered by. It’s said that nearly 75% of those buried in Hope Cemetery are the artists and sculptors that once lived and worked in the region. 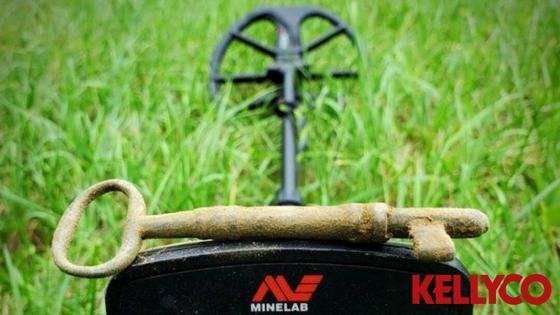 A skeleton key from New England.

Now, as I grow older, I still want to learn more about the lives of early New Englander’s, and years of doing the hobby I love most, metal detecting, has brought me closer to history than ever before. Almost instantly, I knew this would be the hobby that would help me learn much more of all those who came before me. Though I will never step foot into a cemetery with one in hand, as no one ever should, I do find myself often searching for locations like old homesteads, those at eternal rest, once called home. This to me is the closest I will ever get to time travel and, in a way, get to meet those I have learned so much about. When I find relics that were once in their hands, it allows me to tie it all together and imagine what day to day life must have been like way back when.

So, the next time you are traveling through the region either to visit, enjoy the activities offered here or to search for hidden treasures with your metal detector, don’t forget to observe the resting places of the many who once called this place home and who lost the things you may seek. For those interested, our local historical museums are the keepers of moments gone by, including many relics, and are happy to share the stories with anyone who wishes to know more. Feed your curiosity and take the time to imagine what life in New England must have been like so long ago. Perhaps you, too, can find a story worth remembering or a relic that ties it all together.

You can see more of New England and Ed Merrill at DetectEd Outdoors on YouTube.